“Never forget” at least that is what we said.

Seventeen years ago today, history changed forever. September 11, 2001. It started just like every other day for my brother and me. We woke up and went to the elementary school a mile from our house. My brother was excited about his birthday the next day. It was a normal day, until it wasn’t.

I was in fifth grade. I was ten years old. I didn’t know that my life was about to change forever. That America was about to change forever. I vividly remember being SO upset because the school announced recess would not be allowed because ‘it was too hot outside.’ Shortly after that announcement my mom checked Ben and me out of school. We thought she was doing it as a birthday surprise. I remember reaching the front office and seeing tears streaming down my mom’s face. There was a multitude of parents checking their kids out of school that day. I was confused because it didn’t feel that hot to me so I didn’t understand why so many kids were getting sent home early. Once we got home my mom tried explaining what was happening and let us watch the news. Obviously, my ten year old self didn’t grasp what was unfolding on the television. There was no way this could be real! It was just supposed to be hot outside! Ben tried to stop my panic by calmly explaining that if what we were seeing WAS real that the power rangers would swoop in and save the day. He said we had nothing to worry about. (except making sure his birthday party was still happening.)

In the weeks to come, I felt like everyone was living in constant fear. I was still not fully understanding what happened on 9/11. I was still only ten. I saw the news, I listened to President George W. Bush address the nation, I saw the flags appear on every window front and house around town.

September 11th caused a transformation to sweep the nation. Americans were proud of the flag. Singers were writing songs about freedom. Neighbors helped each other. We supported our troops. We stood together.

“Remember the hours after September 11th when we came together as one to answer the attack against our homeland. We drew strength when our firefighters ran upstairs and risked their lives so that others may live; when rescuers rushed into smoke and fire at the Pentagon; when the men and women of Flight 93 sacrificed themselves to save our nation’s capitol; when flags were hanging from front porches all across America, and strangers became friends. It was the worst day we have ever seen, but it brought out the best in all of us.” Senator John Kerry.

Over the years, as I got older, I slowly realized the gravity of the acts of terrorism against America that day. You see, in school, children are taught about history. My whole life I was reading these history books with huge accomplishments for mankind but also about horrendous tragedies from the past. But now, September 11th is written down in American history. I was alive for something that changed my country forever. It is something I was a witness to. It blows my mind that there are people in high school now that were not alive that day in September. I guess that is the funny thing about history.

Growing up, I was always taught that we had history lessons so history wouldn’t repeat itself. We learned about WWI and WWII to prevent another world war. We were taught about the fall of dictatorships and communism to prevent future governments from failing. We were taught about the division of America in the Civil War to prevent this nation from becoming so divided again. We were taught to NEVER FORGET. So let me ask you this: How did we get here? Seventeen years later? Our country is divided- and not just between democrats and republicans. We don’t support our troops. We idolize cowards who “sacrifice everything” by NOT standing for the National Anthem. Our veterans don’t get the healthcare and opportunities they should. We are making movies about monumental moments in American history, but removing the flag.

When did it become an UNPOPULAR opinion to be proud to be an American? When did we stop letting our enemies be foreign and start attacking each other? When did we remove the flag and the Pledge of Allegiance from schools? How did America let so much hatred and fear cover our history? How could we forget?

I did not know anyone personally who lost their life that day, nor know anyone who lost someone. And I can’t imagine what this day is like for the ones that did. The heroes that sacrificed everything.The heroes that have sacrificed themselves in all the events stemming from 9/11. The men and women who are still fighting and risking everything today. It has been seventeen years since 9/11, but with heavy hearts we WILL remember the sacrifice. It was not in vain. We will stand together under God and make America the greatest country again. 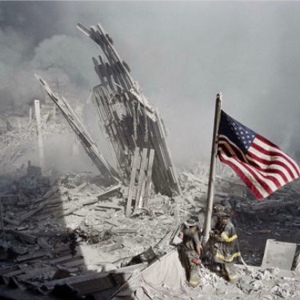