Skip to content
January: had terrible insomnia all month. Finger knitted A LOT of beanies. Read The Uninvited and highlighted every word. Rewatched Vampire Diaries and decided how I wanted my anti funeral to be. Started my genetic counseling for my genetic testing for Huntington’s Disease.

February: fought with my mom because she was worried my eating disorder was back. Really struggled with self worth this month. My husband agreed to come to therapy with me. First and only time. It didn’t go well. Terrible insomnia most of February too.

March: Had my first neurology appointment. Went to an awesome Ron Pope concert. Lost a patient. What do you know? Insomnia was bad in March too. Started taking ambien again: update- still didn’t help. Started to lose trust in a lot of things. Had a melt down in my last therapy session of the month. My therapist just let me lay on the floor until I could breathe again. She asked if I’d start coming twice a week.

April: Wild Reeds concert. On April 15 after six months of tests and genetic counseling, finally got the news I don’t have Huntington’s disease. My brother and the girl I thought he was going to marry broke up.

May: My small group babes graduated highschool! VEGAS! Rj and I went to a Celine Dion concert and got in a huge fight before leaving.

“Takes an army of my friends to fill my cup
One word from you to make me shut up”
My cousin started her summer at our house.  Did my first pediatric sexual assault case- on a 2 year old.

June: cried ugly tears to 5 feet apart. Felt unloved and lonely. Did three rounds of chest compressions on a patient- patient survived and I learned I am not in the great shape I thought I was. My mom sold her house.

July: went back to Orange Beach. Our first trip ever 6 years ago. Went to Rascal Flats concert, I sweat out half my body weight.  Bought a new couch. Got robbed.

August: returned to my favorite place ever for my birthday. Had a “chat” with my husband. I spent the next month praying all night every night for healing, but feared separation. Family drama. Bought a pregnancy test for my 14 year old cousin. Started Red Sea Rules, a book that was preparing me for what was to come. Started going back blonde.

September: lots of football games in Tuscaloosa. Made it on jumbotron at Bryant Denny.

Found out my brother is going to be a dad with a girl he met off Tinder.  Did a 7 graft CABG on my patient and was once again amazed my cardiac surgery. Went to a prayer revival at church with my husband and I’ve never been a part of something like that. Had a huge meltdown at work and had to talk to my manager about it.  Found my new favorite worship song: Waymaker. Cried every single day in September.  Learned a new way to pray.

October:  Really wanted to love October again. But I cried ALMOST everyday in October too.

I’ve never prayed, worshiped, read my Bible/devotions/ etc more than I did in this season. In October, I started to lose my trust in God. Lex died.

Messed up my shoulder. MRI’s and acupuncture.

Went to Texas for the first time. It was awesome. Had another meltdown at work. Football games and Tuscaloosa. My sweet aunt beat her stage 4 breast cancer and got to ring the bell. First full blown panic attack in a long time. Too much time spent in bathroom (but lost a few pounds so won’t complain), cried at work and then cried in my closet because I couldn’t unzip a dress. Fun month.
November: RJ had hair surgery. Actually started communicating with my dad. Saw Scarypoolparty in concert. Football games and Tuscaloosa. Sat 20 feet from Trump and Melania and she waved at me. Finished my good reads challenge of 75 books. Met my best friend’s baby for the first time. Went to see Wicked. Read some really great books with fantastic dedications.

December: I spent more time in the ER than actual payable hours. Rj had two more surgeries. Passed my century ride on Peleton. Posted a short story on Instagram of me playing piano. Decided to start a war with my family. Third wedding anniversary. Terrible GSAC case.

So 2019 really sucked for the most part. But here are a few things that didn’t suck:
Songs: This is a Move- Brandon Lake, Waymaker- Leeland.  If we were Vampires- Jason Isbell.  Out of Love- Alessia Cara. Be Still- The Fray. Say Something- Great Big World.  Start a War- Klergy. My Name- Wild Reeds. Out loud- ScaryPoolParty. Leave the City- twenty one pilots.
Books: The Uninvited. Red Sea Rules. Girl in Pieces. Ryan’s Bed. Teardrop Shot. Kill Switch. Verity. F*ck Love, Dare Me.

And as always, FRIG.

2019 was a really challenging year. I learned some things I need to work on individually and as a couple. Communication, intentionality, kindness, romance. And lots of dancing. 2019 forced me to grow. I’m learning I don’t need validation from anyone but myself. My music is changing. I am changing.
It’s been real, 2019.
Xoxo,
jojo

I thought about cutting Sunday night.

I was laying in bed alone Sunday night around midnight and I was thinking about cutting. I was merely curious. Obviously, I didn’t do it. I was just curious. I was curious if it would have still felt the same. If my shaking hands would have been stilled. If my pounding heart would have slowed. Would I have felt like I could take a deep breathe? Even for just one fleeting moment. Or was that all things I left in the past.

I thought about cutting Sunday night. It’s not the first time I’ve thought about it over the last few years. It doesn’t consume my thoughts like it used to. But there are moments that I have a few weak minutes. Or like Sunday, a few hours of weak moments. It’s been 3 years, 8 months and 27 days since the last time I cut, or played with my eating disorder. Some days it feels like a lifetime ago. Some days I wake up and it feels like yesterday. Some mornings I have such vivid dreams I wake up in a cold sweat and have to run to the bathroom and check my arms.

I feel like people that are (because once a cutter, always a cutter) self harmers should get chips like in AA. I think I’d carry that chip around with me. To feel accomplished. To maybe have recognition. To remind myself not matter how hard the days have been, I haven’t slipped. To have a tangible object to illustrate my strength. But there isn’t a support group offered for self harm. There isn’t a church on every corner that will have receptions to congratulate 1 month clean.

The thing is, even in 2018, people still don’t know how to react to self harm. I can’t openly talk about how I’m feeling. I mean, if I really wanted to, I could confide that the dark thoughts in my head still haunt me. That I have demons that scream at me and it’s getting harder to silence them. But I can’t tell anyone I thought about cutting. Even when I didn’t do it and never intended to actually do it again. I can’t explain i was just curious.

I think I am so intrigued with the thought again because of how my recovery was shaped. I often think that my recovery started the day I was in the emergency room and I was 1013’d. When I was stripped of my humanity and forced to believe there was something genuinely wrong with me. When I FINALLY got out of inpatient and graduated from my intensive outpatient program, I was so broken and angry and drugged. Part of me wanted to cut just to show everyone I could. But I didn’t. My wonderful therapist that I had been seeing for months before my hospital stent reminded my recovery started much earlier than on New Years Eve. It started the day I talked in therapy- after multiple sessions of silence. I was starting to dig into the roots of my feelings. I was learning that the self destructive things weren’t helping me anymore. The hospital and IOP and all the people involved did the single worst thing they could have done at the time. They took away my will. My progress. My coping skills. My hope. My therapist reminded me of how far I’d already come and that no one could take away my recovery unless I allowed them.

It has been the longest journey of my life, but I haven’t once faltered. Self harm and depression and anxiety are a slippery slope. I am afraid it always will be. I have grown an immeasurable amount since 2014 and I am stronger than I ever thought I could be. Even though sometimes I think about cutting, it is from a totally different mindset. I want to see if it is the same release as it used to be. I want to be the one to make the decision for myself to whisper goodbye to the old me. I will forever wonder many questions about cutting that I believe would give me closure and a peace, but those things were taken away from me. Most days, I am fine with this, but nights like Sunday I lay in bed thinking of them.

I’m not the only one going through things. My family isn’t the first with a devastating caner diagnosis. I’ve been through enough therapy and read enough books to know I’m not the only one struggling. I’m not the only girl that has ever have anxiety or depression or had an eating disorder or was a cutter. I know I’m not the only one, but why do I feel so alone? I have a fake twitter name so I can express how I am feeling without worrying about being “judged.” I don’t link or tell anyone about my blog because I don’t want people walking on egg shells around me. I don’t tell my family or my husband because how do I explain something I can’t even explain myself?

I thought about cutting Sunday, just because I was curious. If you are reading this and actually know me (sneaky sneaky)- DO NOT FRET! I know I will never cut again, for many reasons:
1). Once you start the shit, it’s hard as hell to stop. So I just won’t do it.
2). I would never want to worry or disappoint my family again. I can’t imagine the hell I put them through. For that, I will always be sorry.
3). I would never risk getting sent back to ANY hospital. It is just not worth it. Trust me.
4). I have a tattoo surrounding my ‘sobriety” date. And getting a tattoo removed would suck.
5). I’m stronger than I was. I’m still discovering myself without being labeled a self harmer and everything that entails. I know my triggers and warning signs. I ask for help when I need it. 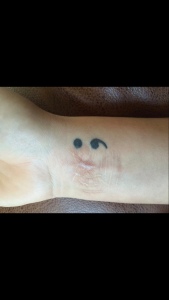 I thought about cutting Sunday, just because I was curious.